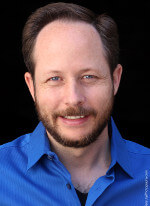 In 2006, Chris was in the midst of serious relationship challenges. Hoping to turn things around, he went to the “spirituality” section of the bookstore and unexpectedly found himself on the rocky road of personal transformation…

Later that year, Chris attended The Monroe Institute’s Gateway Voyage Program where he delved deep into his consciousness and returned with a new clue to follow. One trainer suggested that Chris check out “The Diamond Approach.” That’s when the pieces of Chris’ life began to snap into a meaningful mosaic. He reluctantly transformed – moment by moment – into the empowering teacher he is today.

Prior to that new direction in life, Chris worked in the corporate world in hopes of early retirement and the realization of the American dream. He stared without a college degree nor computer skills, and miraculously landed a tech support job at a Silicon Valley internet startup. Later he earned a business degree from San Jose State University. Still lacking the required technical skills, Chris got hired by industry-leading companies like Adobe and Hitachi. They gave him the benefit of the doubt because of his ability to succeed at anything he directed his attention towards.

To earn extra money, Chris created his first spirituality website. With each passing day Chris’s loves of spirituality and entrepreneurship deepened. He created more websites, and they grew in popularity. Within a few years, he was faced with an unexpected ultimatum from the Divine: “Continue rationalizing why you keep a soulless job, or embrace your passions, serve others, and make a difference.”