Chris Cade's Blog » My Fight For The Joy Of Being Defenseless 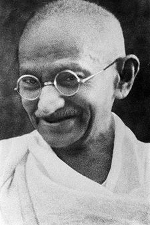 We’ve all heard of stories of Mahatma Ghandi and non-violence, and Jesus advising us to turn the other cheek when struck, but how does that relate to us every day?

I’ve struggled with that very question, especially having been an advocate for “eye for an eye” for many years. It made sense to me that if somebody set a home ablaze, that their home would in turn be torched, and I didn’t understand what was meant by “an eye for an eye makes the world blind.” That just seemed like spiritual nonsense to me.

So often in my life I’ve thought about the “fight.” Not so much in a literal sense with my fists, but rather, on a mental level. The experiences of my youth led me to want to right the wrongs, particularly those wrongs against me, and as mentioned before I saw “eye for an eye” as a means for equal and fair justice. I would “fight” when I’d flip off or honk at another driver who cut me off, when a friend or family member “wronged” me and I felt the need to set them straight or just to be “right” about something. And I definitely “fought” (politely, mind you) when somebody cut in front of me in line.

And while an eye for an eye may deter in some cases, it’s the stark opposite of what historically non-violent leaders like Jesus and Gandhi had in mind; this challenged me even more.

As time has passed, I’ve felt less resonance with “eye for an eye” but for a while still didn’t understand how to experientially learn a differing perspective. Something that really helped bring it together for me is the following quote from Vernon Howard’s book, “Esoteric Mind Power”

“Have no fear in not knowing what to do about a problem. Fear activates its negative relatives of impulsiveness, ego-protection, and an anxious craving for security.

Instead, let the mind be still. Never think of fighting, for an answer won by fighting will soon require another answer and another fight.

The problem exists because of an agitated mind, so when the mind rests from its own agitation, there is no problem at all.”

After reading the above passage, it finally clicked for me. I particularly resonated with the phrase that I bolded, yet I never thought of it that way. Another way to look at this is how some people say “the best defense is a good offense.” However, as I became more in tune with feeling my presence, I began to see that if I feel the need to defend then I will attract into my life people who want to offend. Therefore, if I become defenseless, then the reverse is true and I will continue to attract people of similar nature more and more over time.

Now, I feel more and more compassion than ever before, and I have noticed that there are less situations in my life that I have felt inclined to “defend” or “fight” against. I used to smash spiders when I found them in my home, and now I get a piece of paper and a cup to trap them, then release them outside. Now I eat a strictly vegetarian diet only because I know I wouldn’t kill an animal to eat it, and I don’t feel comfortable having other people kill the animals on my behalf.

If you had asked me a few years ago if I ever thought I might feel this depth of compassion for other beings, I’d have thought your wheels were spinning but the hamster was dead. 🙂

I now understand what it mean to turn the other cheek when struck, and why an act of compassion has the potential to be much more influential and transforming than an act of violence in like kind. Even then, I cannot say I am certain that I am yet at that place of presence where I would simply turn another cheek and take a beating like Ghandi and his followers, but I do now understand how to have compassion for all people, including those who have hurt or will hurt myself and others. To put it as concisely as possible, I’ve learned this:

Fighting does not bring us closer to our goals, but rather separates us from them.

This awareness has brought a greater amount of joy to my life than I could have ever imagined. Progressively I’m realizing, and truly and deeply understanding, that it really is my choice how I respond to situations, and that no amount of “fighting” or negative response will change the truth of the situation… the truth that there is only one common element in all experiences in my life – me.

I am the only person I can change, so when I fight against others, whether I realize and feel it or not, I’m actually fighting against myself.