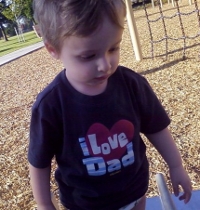 When it comes to parenting, sometimes our desire to protect our children actually disables them from experiencing the world in a way that they learn what’s best for them. How many times do parents say “Don’t do that! That’s dangerous!” or some variation of that? These are perhaps the most common phrases among parents of toddlers, and as a result, they become very tired phrases.

It’s only natural to want our children to be safe. However, when we look at things from a bird’s eye view, sometimes the paradigms that we were raised with won’t work if we want our children to be simultaneously safe and empowered. Today I’m going to begin sharing with you some of my thoughts about conscious parenting and what it takes to raise an aware and enabled child.

Much of what I will write is based off of Alfie Kohn’s work in Unconditional Parenting, although as it is my interpretation and application of his work, you’ll probably find significant differences. I also integrate facets of attachment parenting, unschooling, spirituality, The Diamond Approach, and other modalities… which makes for an interesting and ever changing exploration of parenting.

Today I’m going to start with a principle that is an extension of unschooling. If you haven’t heard of unschooling before, then here is what I personally consider it to be:

The experience of learning naturally, in ways that are uniquely suited to a child’s unique preferences and interests, and is facilitated through through the experiences of life.

There is no formal learning time nor a specific school because every moment, and every place in the world, is an opportunity for the child to enjoy learning through personal and experiential discovery.

I personally prefer to create an environment in which I don’t have to say “No” as frequently as many parents do. It is my desire that my son has as many opportunities to learn through his own experience as possible, so that he can personally discover what is right for him.

The reason for this is that when I tell him “No,” I am imposing MY views onto him. I’m telling him what I believe is right for him (or I’m just trying to control him from annoying me somehow), and not giving him an opportunity to find out for himself what is right, or why I might want him to refrain from a particular behavior. Ultimately, this creates a situation where he will usually obey me in my presence, yet when I turn my back, he’ll stick his hand in the proverbial cookie jar… or on the hot stove

Right now he’s only two and a half, so some of that is inevitable simply by the psychological nature of toddlers. That’s perfectly normal as he’s exploring his independence and pushing boundaries. However, what happens when those boundaries become dangerous? What if he wants to stick his hand on a hot stove?

Should I let him burn himself? After all, that sure will teach him not to touch hot things anymore! He would learn through his own experience, and though it may scar him, it won’t kill him. It’s easy to interpret what I’m saying in both of those lights; however, neither one truly expresses nor honors my ultimate goal which is to simultaneously let him learn what is right for him, while also keeping him safe.

Rather than talk theory, I’m going to use this as a concrete example. He has never burned himself on the stove, AND, I don’t have to tell him ‘No’ or ‘Don’t touch the stove.’ Here’s why…

When he was about 1 1/2 years old, he became tall enough to reach over the edge of the stove and put his hands on the burner. The first few times, we pulled his hand away to protect him. However, I really didn’t want to have to say “No” or scold him for the next year or two while I tried to condition him not to engage in that behavior. When possible, I try to avoid directly conditioning him with my own beliefs.

Instead, I approached the situation two-fold. First, I started turning on the heater intentionally to a point that it would be uncomfortably hot, and at the same time, not burn him. Then, when he would reach for the burner or heating pot, I would simple tell him, “It’s hot” and “It will hurt” and that’s it.

The first few times, he touched it, pulled his hand away and made a face and sound that showed he really didn’t like it. He never cried, and yet, he learned from personal experience a couple of things – he doesn’t like touching hot things, and when I say “It’s hot” or “It will hurt” it’s probably a good idea to trust my wisdom.

Now he still loves to stick his hand on the burner and play with it. He’ll get up on a stepping stool, grab burners, and do all sorts of things with them. However, before he does he always places his hand near or over the burner to see if it’s hot – and only if it’s cool, does he actually play with it.

I never have to say “No” or even worse “I told you so.” Instead, I’ve created an environment where he can explore a usually dangerous situation in a very safe way… in a way that enables him to make decisions for himself, and in a way that can be transferred to other experiences.

Now when I tell him something else is “hot” or it will “hurt” he usually steps away and trusts my guidance.