Just after making a tropical organic smoothie (strawberries, raspberries, pineapple, banana, and apple juice), I was cleaning up the kitchen.

Now, since I became a bachelor again my habits have become a little “different.” See, I have a habit of leaving all the dishes in the sink (or dishwasher) for days or even a week at a time. I wait until there’s a full load ready and run the dishwasher, and then instead of putting all the dishes away, I just pull out from the dishwasher what I need when I need it.

Then when there’s enough stuff in the sink that I can’t find the drain, I finish emptying the dishwasher and then put all the used dishes into it and run it again when it’s full. I guess you could say I’m learning about personal efficiency!

After all, I’m “batching” the “processing” of my dishes, using minimal effort (i.e. not putting everything away just to take it out when I use it… just use it “direct” from “source”); however, there is a byproduct.

Occasionally, food gets kinda old. Yeah that can be smelly and gross, but hey… whatever. 🙂

So anyway – here I am doing dishes and I pulled up this one cereal bowl that was a few days old and I noticed it was pretty nasty. I knew I wouldn’t eat it in its current coagulated state. Then the awareness hit me:

If I were hungry and homeless, I would be –grateful– to be able to eat this exact bowl of old food.

I was reminded of the time a few Christmas’s ago when my former wife and I created several bag lunches and personally handed them to the homeless in downtown San Jose, California. I was reminded further of watching a man dig into the trash can and pull out a half-eaten day-or-more old burrito, and I remember the gratitude I felt when I walked up to him and was able to give him a fresh meal, including dessert, and clean socks.

Then flash back to reality again… the dishes still needed to be finished.

On that note, I looked to the side and saw the straws for my son’s sippy cup. For about a week I had been putting off cleaning them because they had old hardened milk and I had no idea how to clean the insides of these straws effectively. Rather than deal with the problem, I just let them sit in a glass of water softening up the stale milk and trusted eventually a solution would come to me.

And fortunately, one did. 🙂 I went into the hallway and grabbed some Q-tips, and immediately started using them with some soapy water. 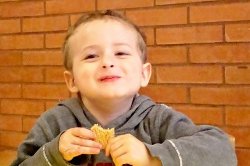 So I pull out the straw, and again I’m reminded… “wow… this old milk is really gross. I definitely would not eat this!”

I continued to clean the straw at arm’s length, seeing all the gunk come out of it, I also began to feel something wonderful. The cleaner the straws became, I continued to experience a greater and greater sense of immense gratitude.. I experienced a deep sense of care for my son, and the ability I have to be able to give to him in such a simple way: Providing him with a clean straw to sip his favorite drinks out of.

(Which is chocolate milk, by the way!)

It also reminded me of the movie “Tuesdays With Morrie,” and how at the end of Morrie’s life (and many peoples’ lives), he needed to wear diapers and have other people wipe his ass for him. For many that would be a shameful act, as Mitch (main character) believes it to be, yet for Morrie he has no shame. He points out that we needed people to clean up our shit when we were little, and we had no shame then… so no sense in having shame about it as an adult either!

With that, I was reminded of some of my own experiences in caring for my son, and in caring for my brother Michael when he was dying from cancer in 2001. And again, there was just a wash of gratitude throughout me…

And it just really hit home, that for me – giving truly is the greatest form of gratitude that I experience. I was reminded how fortunate I am to be in a position to give of myself to others, and how deeply rewarding it is to be able to give… even to people like my son who will never know how much the simple act of cleaning out his straw meant to me.