Chris Cade's Blog » The Death Of My Caterpillar 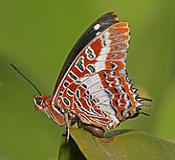 When my son was a young boy, my father bought a live caterpillar set for him. It came with a large mesh container, a certificate to send away and receive some caterpillars, and instructions to support those caterpillars’ transformations into butterflies.

One morning, it was time to transfer the chrysalises from their shipping cup and into the container. They were all attached to a piece of paper that was to be pinned to the side (so they could continue hanging). One of them fell off and into the original cup.

It was coming out prematurely. This little caterpillar maybe was scared from all the motion and falling, and it had broken its chrysalis. It was dying.

I picked up the paper and pinned it to the side successfully so that the remaining for chrysalises could grow as intended. The last one, the fallen one, I placed it on a paper towel in the bottom of the large mesh container.

The next day, it had broken out of the chrysalis. What looked like wings were flatted on paper towel. So were the antennae. A little wormlike body strugged to crawl but it couldn’t. After much struggle, the caterpillar finally gave up and died. The red blood and lack of motion were clear indicators.

Death is just a part of life.

It happens. Fortunately there were four more chrysalises. Four more opportunities to see the caterpillars transform into butterflies. We hoped.

When we came home a few nights later, I noticed something interesting in the mesh container. Four chrysalises and one butterfly. It hadn’t died! I was immediately reminded of the quote:

“Just when the caterpillar thought it was dead, it became a butterfly.”

Perhaps we’re not all that different?

And calling it “my caterpillar” is a bit if a misnomer. Not because it was intended for my son, but rather, because I don’t presume that I can “own” another being.

…Instead, I like to think of “my” as an indicator of preciousness. 🙂